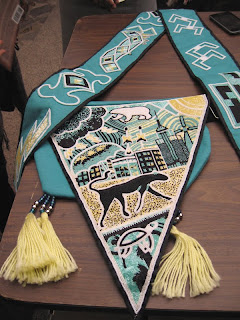 Last night's meeting of the Bead Society of Greater New York included a very entertaining talk by Cody Harjo entitled "Blending History and the Contemporary in Indian Beadwork." Cody is a contemporary beadwork artist of Seminole, Otoe, Creek, Cherokee, and Iowa heritage. She was raised in Oklahoma, but now works for the National Museum of the American Indian in the George Gustav Heye Center in Manhattan (http://www.nmai.si.edu/) and resides in Brooklyn.
Cody gave us a brief history of beadwork in relation to the Native American life but concentrated on her life as a beadwork artist working within tradition but also striving to add a personal stamp to her pieces. The most stunning example of the mixture of tradition and modernity was her version of the bandolier bag shown at the left and below. She depicts her environment of the city and adds a cat with an umbrella, a polar bear, clouds, and a turtle. 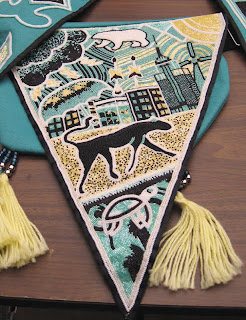 The strap contains images of snakes and alligators. I won't attempt to go through the symbolism but it is an outstanding example of mixing the old and the personal in her artwork.


Cody brought actual examples of her work for us to examine and the crowd around the table with her beadwork never abated. I managed to snap these few photos around the crowd. 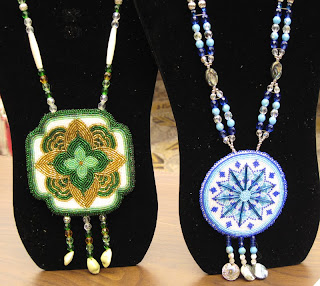 The next two photos are pendants. 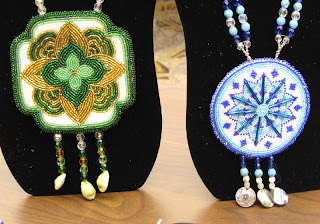 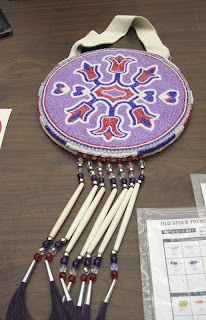 This last photo is another example of Cody's mixing old an new elements. The pattern is a traditional Otoe pattern that Cody has modified and the new is the purple beads that cover a lot of the surface.

Posted by Reckless Beading at 11:22 AM 2 comments: 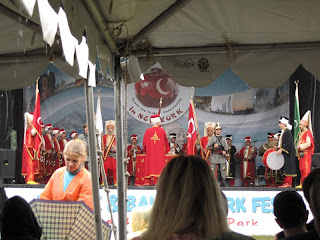 Yesterday my friend Yoshie and I braved the rain to attend the kickoff event of "Turkish Days in New York", a week-long festival of Turkish and Balkan cutltures. Sunday's event was a festival with food vendors, educational exhibits, Turkish items for sale, and performances from Mehter, the famous Ottoman band (pictured to the left), and a variety of folk dance troupes.
Unfortunately, it rained almost the whole time, which put a huge damper on the festivities and prevented some of the merchants from showing up.
Yoshie and I spent most of our time under the tent for the spectators, watching the performances. I didn't take many photos because I didn't want to leave my dry seat and many people stood in our sightline to get a beter view of the stage. For thiose of you Brooklynites, even Marty Markowitz showed up with his usual cheery words and official certificate. 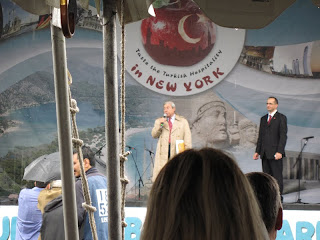 Brooklyn borough president Marty Markowitz (in the tan raincoat).
For those readers in New York, there is a 4-hour parade of Anatolian Civilizations in Times Square today from 12-4, Turkish movies at the New York Film Academy from September 29-October 1, performances and a bazaar at Grand Central on October 2 from 9am-6pm, and a Street Festival/Grand Bazaar on 41 st Street on October 4. For more information, visit Turkish Days in New York http://www.turkishdaysinny.org.
Posted by Reckless Beading at 10:51 AM No comments: 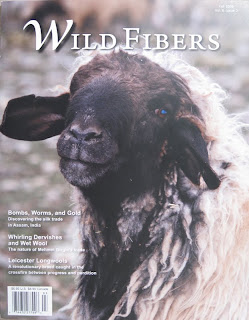 Teaching my embroidery class at The Yarn Tree ( http://www.theyarntree.com/) on Tuesday reminded me that I had never gotten around to writing about the interesting fundraiser for an international student that Linda LaBelle arranged on Septenber 12. A group of us first gathered at The Yarn Tree, her store, for wine, cheese, and samples of the farm-raised lamb that Linda in now carrying.

After some pleasant coversation and good food, we moved to the studio to hear a talks by the two Lindas and look at a lot of slides. Linda Cortwright, publisher and editor, of Wild Fibers magazine (http://www.wildfibersmagazine.com/) about her experience chasing escaped, woolie sheep in the Southern Alps of New Zealand (it involved a helicopter) and her travels to Mongolia to explore felt making and camel raising. Linda is an entertaining speaker and I marveled at her adventerous spirit!

Linda LaBelle then told us about her June trip to Rawande to work with 10 genocide widows to improve their wool spinning and learn to dye with natural materials. It was a fun time and I got to hear two geat talks.
Posted by Reckless Beading at 4:51 PM No comments:

I have finished designing the last of the three projects for the Beginning Embroidery class at the yarn Tree, here in Brooklyn. The class will teach how to set up fabric in an embroidery hoop, how to mark out a pattern, embroidery stitches such as running stitch, lazy daisy, French knots, bottonhole, straight stitch, lines of beads, individual beads, lines of sequins, and individual sequins. 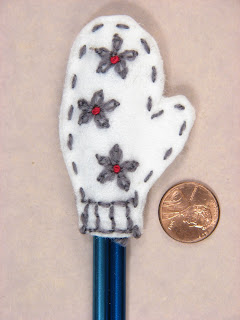 The first project will be this cute, mitten-shaped knitting needle protector. 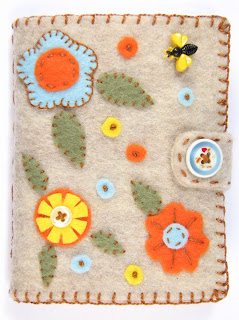 The second project is a needle book, to hold your needles, buttons, pins, and other embroidery supplies. 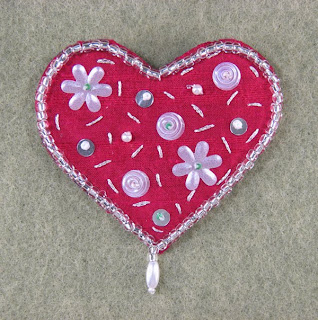 The last project is this sparkly heart that can be used as an ornament or pin.
There are 1 or 2 spaces left in the class that starts on September 15, 2009. If you are interested, visit http://www.theyarntree.com/studio/classes
Posted by Reckless Beading at 12:56 PM 2 comments: