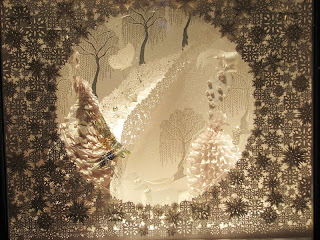 As is our tradition, Don and I went out Christmas Eve to look at the store windows and decorations around the city. So as we get ready to celebrate 2010, here are some of the photos that we took.

We start at Tiffany's with their cut-paper window scenes. 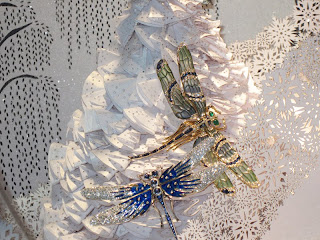 Close-up of the jewelry. 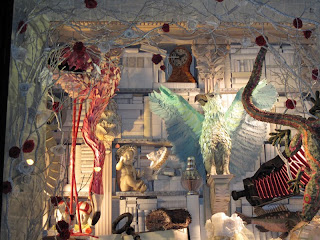 Next to Bergdorff''s, who always have the best windows. 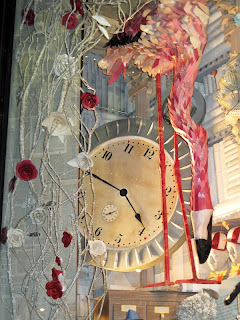 Close-up shot. There is always such a crowd at these windows that it is difficult to take photos of the whole windows. 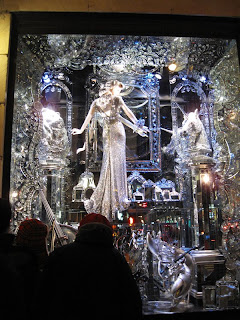 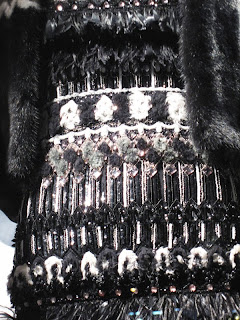 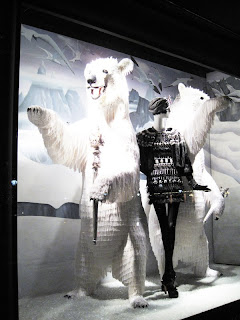 Close shot of the sweater on the manequin to the right. The decoration is fur and beads. 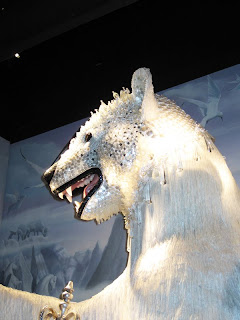 The polar bears had crystal-incrusted heads and chainette fringe for fur. 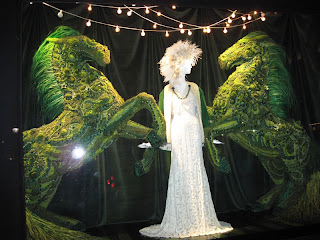 This beauty was surrounded by horses covered in natural materials. 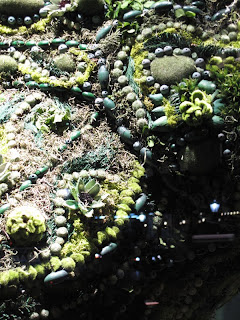 Some ofthe natural materials that covered the horses. 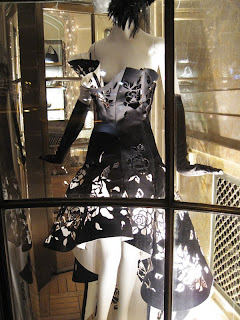 A dress that caught my eye; the white decoration is done as cutouts with white fabric behind the spaces. 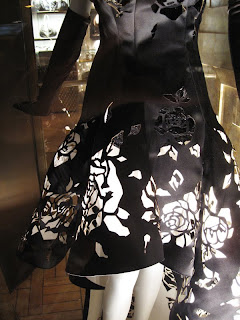 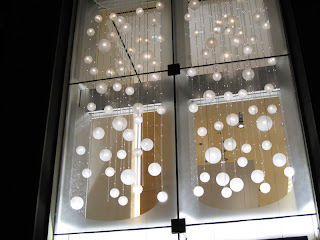 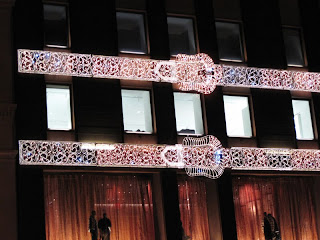 Bands made of metal and lights wrap around a store--forgotten which one. 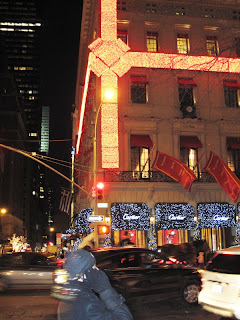 Cartier's is wrapped in their usual Christmas bow. 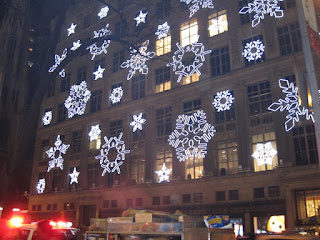 Saks had their facade rigged with snowflakes made of lights that came on and off in time to music. Quite a show! 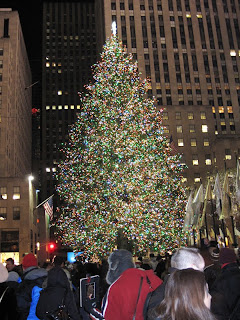 The tree at Rockefeller Center; not one of the largest ones the city has seen. 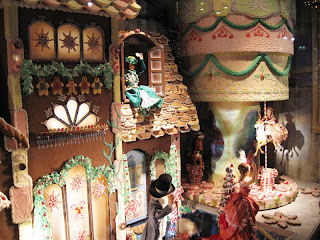 One of the windows at Lord & Taylor. If I had know that my little camera would do such a good job with moving figures, I would have taken more photos of these window. 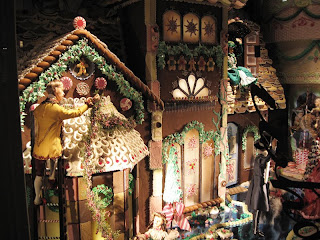 The other half of the Lord & Taylor window.

Posted by Reckless Beading at 12:47 PM No comments:

I will be teaching a second basic embroidery class for those who couldn't take the class the first time around. The class will be held at That Yarn Tree in Williamsburg on 5 consecutive Tuesdays from 7-9 PM starting on January 5. So the class will be January 5, 12, 19, 26, and February 2. The classes at the Yarn Tree are limited to 6 people so students get a lot of individual attention. Here are the 4 projects that we will make: 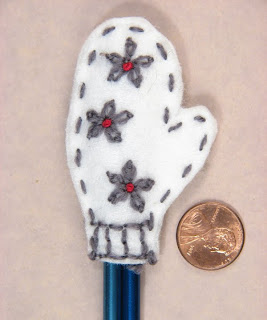 A pair of embroidered felt mittens that can be used as knitting needle point protectors or ornaments. 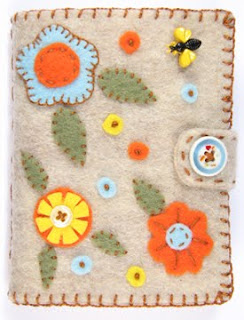 An applique and embroidered felt needle book to hold your needles, pins, buttons, scissors, and other notions. 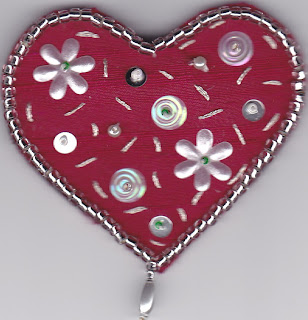 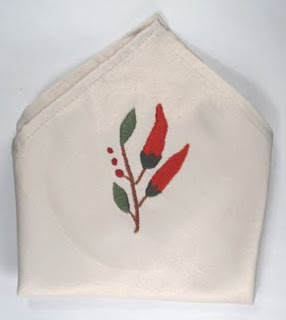 Posted by Reckless Beading at 5:22 PM No comments:

I like the button and loop closure but was never crazy about the amount of "dead" space that the closure creates. So I am in the midst of experimenting with embellish the loop portion of the closure. Here is my first experiment: 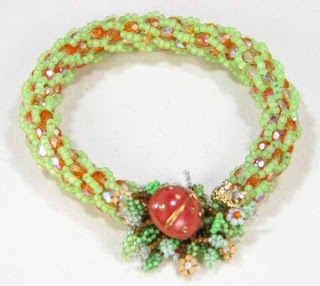 A Turkish Loops bracelet with an embellished loop of leaves and flowers. 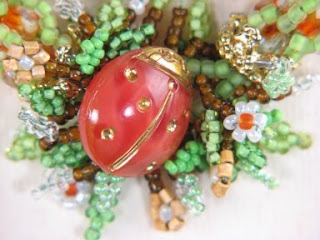 A detail photo of the closure; the lady bug is the button.
Now to try some other ideas, maybe something geometric...
Posted by Reckless Beading at 11:58 AM No comments:

MY BRACELET IN BEAD AND BUTTON 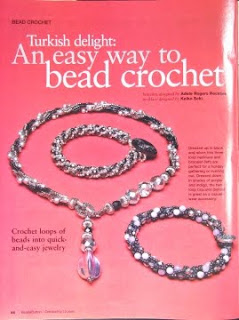 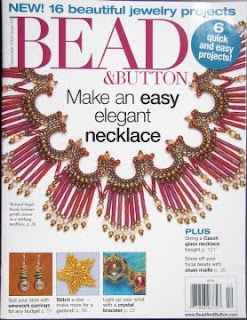 I am so excited that my design for the Turkish Loops bead crochet bracelet has been published in the December, 2009 issue of Bead & Button. It was an intersting experience working with the Julia Gerlach, the editor for the article. Left is the first page of my article and Right is the cover with the beautiful design by Melissa Grakowsky.
I submitted two bracelets with more color but Julia took the design in different directions, one a more Twilight/goth look and the other more casual. It is alway interesting to see what individual spin other beaders put on your design.
Here were my original designs: 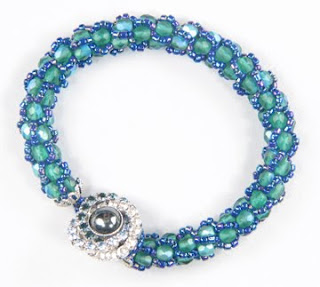 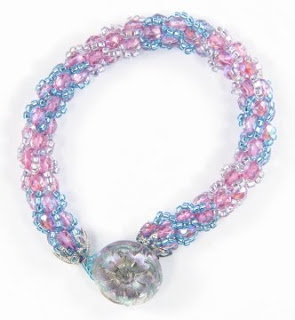