My friend Judith Bertoglio-Giffin of Bead Line Studios contacted me recently to say that she had seen a new video entitled Double Euro Harness Bead Crochet and wondered if this was really a new stitch or if people were just adding names to established stitches.  I took a look and, indeed, people are adding names to established stitches, resulting in more confusion about bead crochet.

So, let's try to lessen some of the confusion with an illustrated comparison of the 2 bead crochet stitches that masquerade under so many names. There are plenty of free tutorials on the web that take more time to teach you each stitch; my purpose is just to show the anatomy of each stitch so that we are all talking about the same thing.
When crocheting a tube with beads, there are 2 main methods of construction used today.  The one that most beaders in the U.S. learn first is:

This is often just called bead crochet or tubular bead crochet, but a more accurate name in the U.S. and U.K.is slip stitch bead crochet.  Why do I mention the U.K.?  Because crochet stitches have different names depending on which country you are in; this stitch happens to have the same name in both countries.  For our purposes, here is the anatomy of this stitch:

1.  The foundation row is made by sliding a bead down close to the hook and doing a chain stitch over the bead.

2.  Every other row is worked under the thread that runs through the hole in the bead. 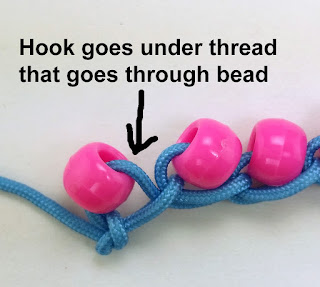 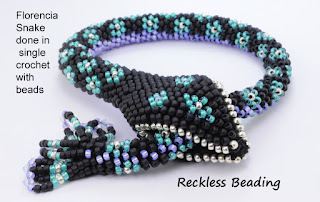 The new video entitled "Double Euro Harness Bead Crochet" is apparently referring to the English term of double crochet.  I looked at the Russian video that calls the stitch "Harness Bead Crochet" and it seems that the phrase is a translation problem since the video also refers to the finished necklace as a harness (which is known as a rope among English-speaking beaders).  You can even find a video entitled "Knitting Harness Beaded Crochet."  What?
So what stitch do all these names refer to?  Let's look at single crochet with beads and see how it differs from slip stitch.


The foundation row is exactly the same as for the slip stitch with beads: slide a bead down and chain over it.

Take a look at the back of the foundation row and notice the teardrop-shaped chains behind the bead: these are where the crochet hook goes in.  In this example, the stitch will be worked through the top thread of the loop.  More about that later. 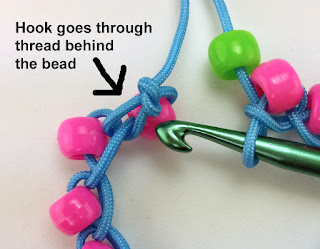 Notice in the last photo (above) that you have made another row of teardrop-shaped chains behind the green beads; the next row is worked into the top of those chains, just like the 1st row.


You can actually work the single crochet with beads stitch 4 different ways depending on whether you go under 1 loop of the chains behind the beads or both loops and whether you bring the bead down before or after you make the 2nd thread loop on the crochet hook.
Each method results in the beads being in a different position, affecting the structure of the tube, how much the tube spirals, and what patterns you can work into your tube.  Here is a photo from Bead Crochet Snakes that show the same pattern done in each of the 4 different methods of single crochet with beads.

Which is better, slip stitch or single bead crochet?  Depends on what you want to do.  Slip stitch bead crochet has less thread showing between the beads and produces a sturdy (sometimes stiff) rope, but it is very hard to increase and decrease with this stitch.  The beads sit half a bead over from the previous row, resulting in a pronounced spiral, which restricts the type of decorative patterning you can do.

Single crochet with beads has more thread showing between the beads than slip stitch, but the "hand" of the finished tube is more supple.  You can do 3-dimensional shapes with this stitch because it allows easier for increasing and decreasing.  You can also do a different kind of decorative patterning with this stitch.

I hope this helps clear up some of the confusion around tubular bead crochet.  Now I am going back to work on my pattern for a bead crochet rose. 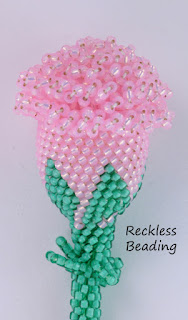