We did our usual tour of the Christmas windows in Manhattan on Christmas Eve so here are a few photos of the high points.   First is Barney's with a Lady Gaga theme: 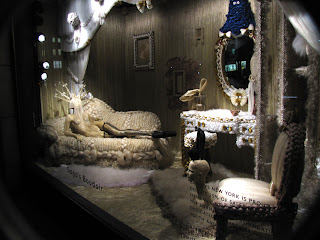 Gaga's boudoir with everything covered in hair. 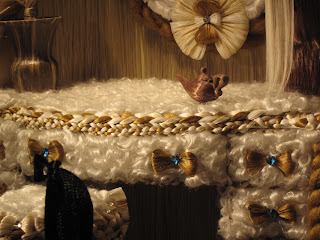 Then it was on to Bergdorf's.  The side windows were fashion shoots with manequins in animal heads. 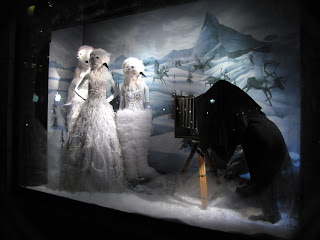 The main windows gathered together items made of one material. 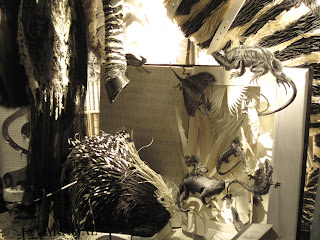 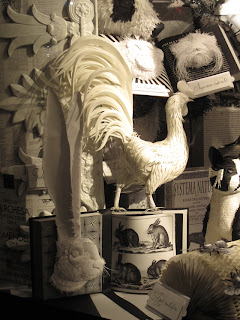 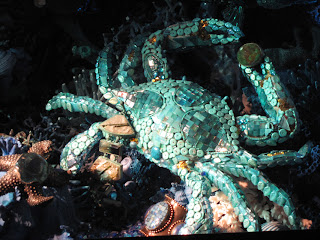 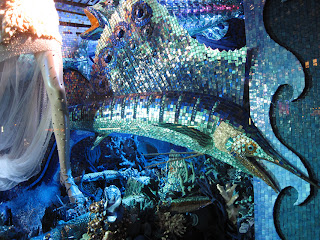 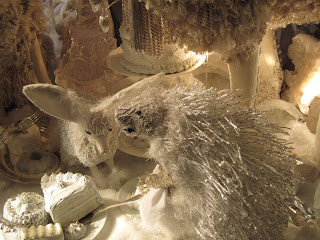 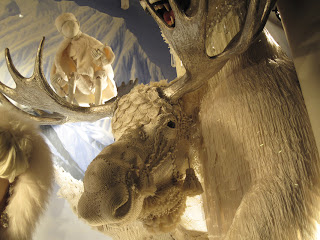 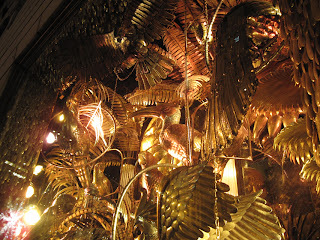 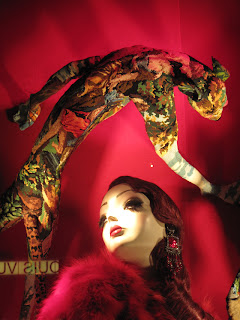 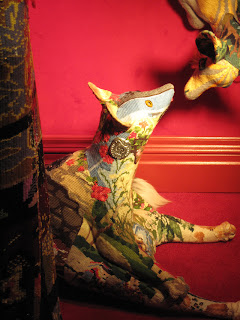 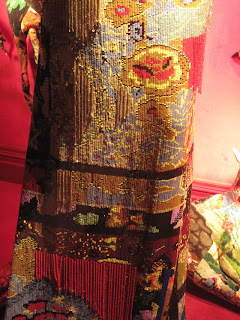 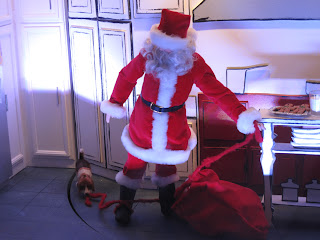 Macy's did windows that were full of motion and a little nightmarish.  The theme had something to do with the magic of ornaments.  Since everything was moving, I took short videos to give the idea. 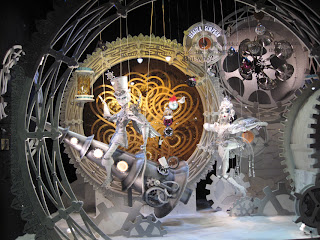 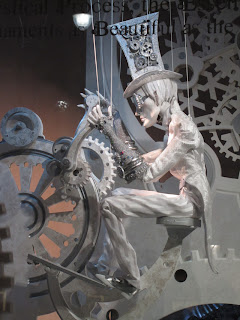 Then we went home to watch for Santa.
Posted by Reckless Beading at 7:07 AM No comments:

HAPPY HOLIDAYS TO ALL

Both Don and I have been so busy with theater work (the poor guy is still at the shop now on Christmas Eve) that we decided not to drive ourselves crazy decorating a tree or buying presents for Christmas.  Feeling bad that we couldn't put up a Christmas tree this year, Don remedied the situation a few days ago.  Behold this year's version of presents under the tree: 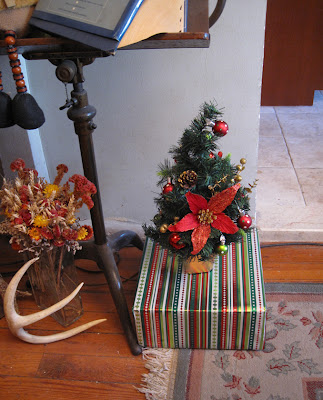 So may you all be as creative and unstressed in you holiday celebrations:  Merry Christmas, Happy Hanukkah, and Happy Kwanza.
Posted by Reckless Beading at 2:06 PM No comments:

The months since September ran together as I worked on three knitted costumes for two operas for the Metropolitan Opera.  The first project was a lovely but challenging machine-knit sweater for the very pregnant Marguerite, played by Marina Poplavskaya, in a new production of Faust.  The costumes were designed by the talented Paul Tazwell. 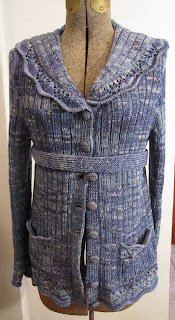 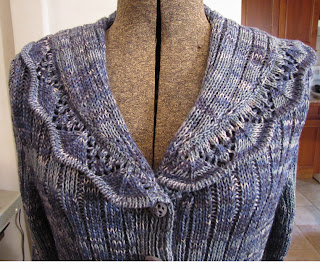 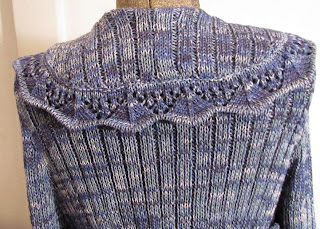 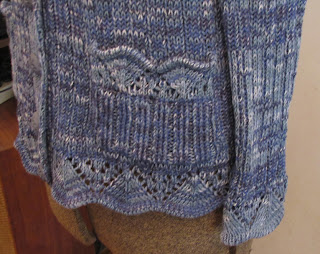 The yarn was two strands of different variegated yarns that were made in Italy.  The shopper thought that the yarn was cotton but, working with it, I came to the conclusion that I was knitting with cashmere.  It was very soft and light.

After that I was on to more chain mail for a new opera entitled Enchanted Isle, a mashup of Shakespeare's The Tempest  and A Midsummer Night's Dream. I had to make as set of chain mail for Neptune, played by Placido Domingo, that was supposed to look like it was distressed from being underwater.  After many samples, the costume designer, Kevin Pollard finally chose this sample: 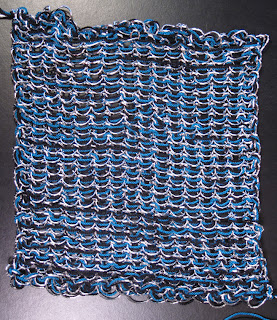 You can see the sketch for Neptune here:http://www.wqxr.org/#/articles/wqxr-features/2011/dec/06/wqxrs-met-opera-preview-enchanted-island/slideshow/.  Scroll through the designs to number 5.  I am curious to see the final costume.

After I finished the chain mail pieces for Mr. Domingo, it was decided that I should knit another set for the understudy, a singer with the voice of an angel and a 63 inch (160 centimeters) waist.  So I madly knit another, bigger set that was finished on December 17.  Now I can take a break from knitting and get back to some beadwork designs with fast-approaching deadlines.  Oh, and  I think there is a holiday or two coming up.


Posted by Reckless Beading at 2:04 PM No comments: 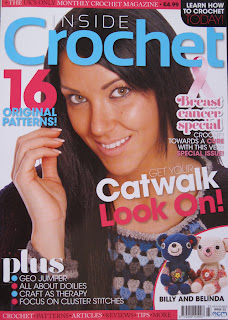 Wow, it has been so long since I have had a chance to post that blogspot has changed their setup.  I have been so incredibly busy with knitting costumes and beadwork design (more about that in the next post) that I have had no time for anything else.

Late though it is, I want to let everyone know that November's issue of Inside Crochet did indeed publish a lengthy correction with  proper credit for my bead crochet designs in the Turkish Delights article in Issue 21. 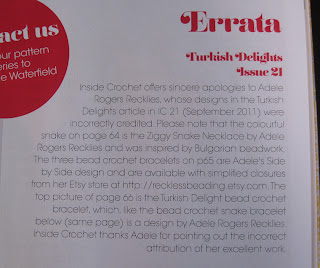 Here is a photo of the correction on page 71.  If you have trouble reading it, blame the current fashion of magazines printing text in grey.

Thank you for all of the comments that you left on the original post about Inside Crochet leaving out design credit for my beadwork.  I still don't know what happened, other than a representative of Inside Crochet told me that it was their fault.  Luckily, the matter was corrected.
Posted by Reckless Beading at 1:29 PM No comments: 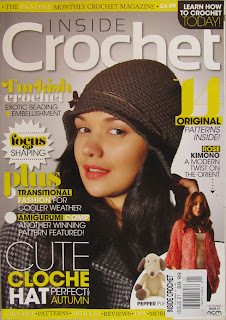 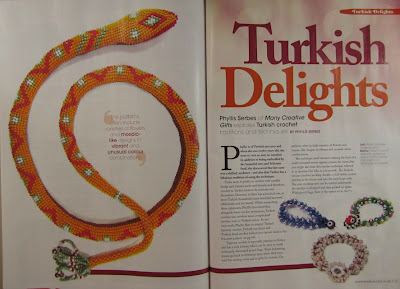 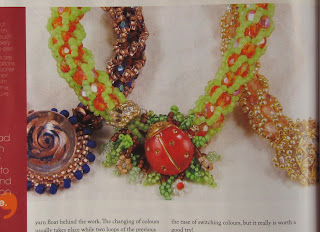 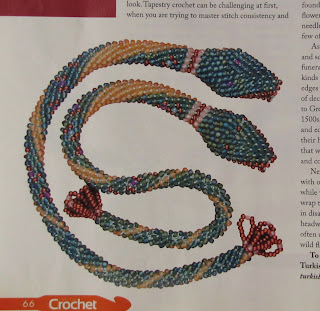 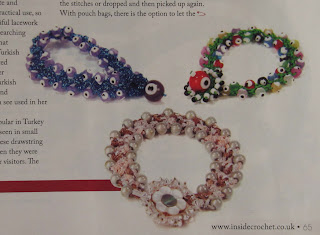 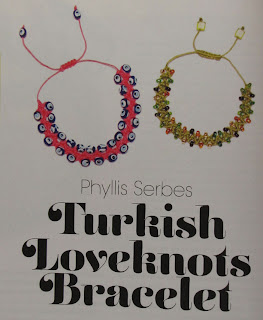