My Froggy of Friendship 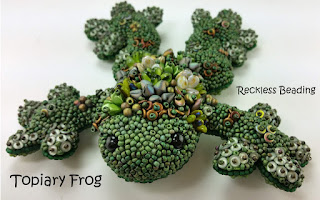 Now that Spring is here, it is time to show you my latest bead embroidery effort.  It is special to me because when I look at it, I think of the friends who were involved in it's making.  A few years ago, my friend Stephney Hornblow gave me a stuffed, toy frog left from a challenge among her beading circle in Barton-under-Needwood, England.  Stephney had opened a seam in each animal toy, removed the sand inside, and replaced it with a lighter stuffing; then each group member chose an animal and covered it with beads.

As soon as I saw the frog among my choices of toy animals, I knew what I wanted to do.  Years ago, the Brooklyn Botanic Garden had done a topiary frog and I was reminded of that botanical creation when my friend Suzanne and I ran across a succulent topiary cat as we were walking to the studio of our friend Stephanie Tomalin.  So I immediately thought of doing a succulent frog in beads when I was offered my choice of animals.

In 2016, I had fun shopping for shaped beads that reminded me of the leaves of succulent plants while visiting the booths of my friend Beki Haley of Whim Beads, Betcey Ventrella of  Beyond Beadery, and Leslie Pope of Twisted Sistah Beads and Fibers.
Professional and family commitments kept me from starting on the frog until last year, but I finally had a chance to start the embroidery- 3 times.  The oft-forgotten truth of doing something new is that it might require many tries until you are happy with the results.  When I got to the point where I wasn't sure what I had, I was grateful that my friends Nikia Angel of Bead Gypsies and Judith Schwab of Bodacious Beads independently gave me encouragement.  It's always nice to have others let you know that you are on the right track!
I started the embroidery with the most important part: the "succulents" on the back of the frog; the next step was to fill in around each "plant."

I started sewing lines of beads to mimic the wire structure of a topiary but it didn't work, so I sewed a line of green beads along the seam of the toy between top and bottom to lend some definition.

After that, I figured out smaller groups of "plants" for the limbs and then the "greenery" for the feet.

My plan had been to do a taller "plant" to fill in between the "succulents," but longer "leaves" obscured the fun groups of beads, so the shorter "plant" won out. 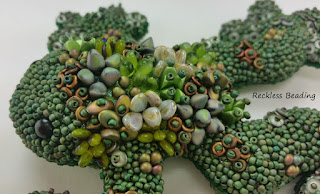 For the bottom of the topiary frog, I played with varying the length of the fringe for the "moss" to give it more interest, but I couldn't resist a "volunteer plant" because you know that real plants love to keep spreading.

To top it off, Don took a photo of the frog socks for sale at the New York Botanical Garden's shop because they complemented my new frog so well. 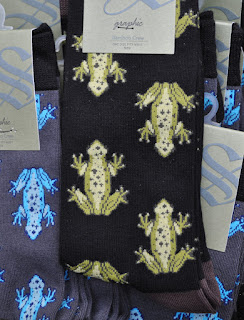 Now Froggy sits front and center in the china cabinet to remind me of the positive force of beadwork in my life.

Posted by Reckless Beading at 6:18 PM No comments: