August has been a cruel month with the deaths of Aretha Franklin, John McCain, and Neil Simon, but the death that hit close to home was that of our friend Carol Shelton on August 10.  She was a long-time friend, jewelry artist, theater lover, citizen, and force of nature; some of you may remember her polymer clay work in the 1990s and early 2000s.
I don't remember exactly when I met Carol and her husband Allison; it was definitely at Kent State University sometime around 1970, but I do remember how warmly they welcomed me into Don's circle of friends.
Life took us in different directions, but we managed to keep in touch.  In 1977, Carol had a part in the movie Slap Shot as the fashion show commentator, one of her claims to fame that tickled us all.
Both Carol and I took up jewelry making in the 1990s: I gravitated towards seed beads as an extension of my theatrical costume work and Carol began to explore polymer clay.
Below is a photo of her necklace from Bead Art, a book showcasing the pieces that were selected for the first Beadworks Exhibition at the Diary Barn Southeastern Ohio Cultural Arts Center.  These Dairy Barn exhibits started strong and went on to become something that all of us beaders aspired to. 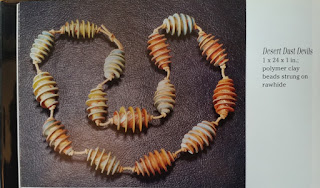 Her explanation of the necklace. 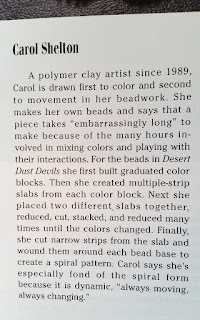 One of my enduring memories of Carol and Allison centers around the 2006 Dairy Barn exhibit; I had a piece accepted into the show and we decided to travel from New York City to Ohio for the opening of the show on Memorial Day weekend in May. The plan was to meet Carol and Allison at the Dairy Barn for the opening, but we all know what happens to plans.  The first part of the trip was a disaster, as bad weather from New York City to Ohio delayed our early-afternoon flight so much that we didn't arrive in Cleveland until almost all of the car rental places had closed.  Finally scoring a car, we didn't reach my parents' house until about 3 am, which meant that the 4 of us (my parents were joining us) got a late start on the drive down to Athens the next day.  We were actually doing pretty well on time until the heavens opened up with a rain that made driving a real problem.  I kept calling Carol and the show organizer because it was a question of whether we would even get there while the event was still going on.  We finally ran through the doors at the Dairy Barn about 45 minutes before the opening ended- wet, totally frazzled, and starving- to find Carol and Allison waiting to shepherd us around the event.  They had been checking the door between perusing the exhibits.  After the opening party, they also knew exactly which restaurant to visit to get a nice meal, because we all needed it at that point.  We ended the night on a much happier note.
The Dairy Barn trip was also the first time that we saw "the art car," Carol's project of attaching magnetized reproductions of paintings to her car and rearranging  them as the mood hit.  Here is Carol, wearing one of her necklaces, with her art car.  People were fascinated by the car as she drove it around Columbus, Ohio. 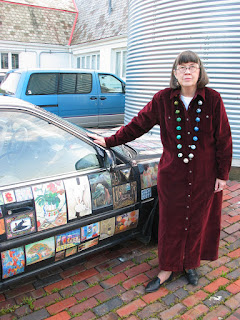 Carol was fearless and inventive in her use of polymer clay.  I remember her explaining to me, at one point, that she was exploring how ephemeral and delicate she could make jewelry components before they lost needed structural integrity and commenting, sadly, that the necklaces didn't last very long.
Even though we were living in separate states, we managed to collaborate on one project just for fun.  She asked me to send her a line drawing which she used to make me the 2 brooches below. 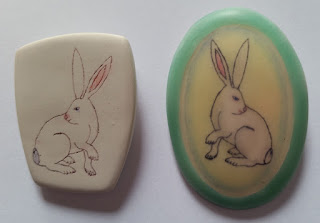 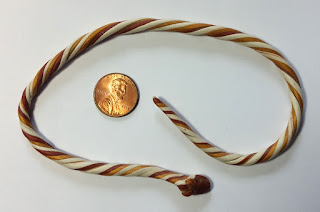 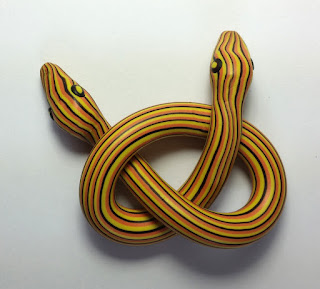 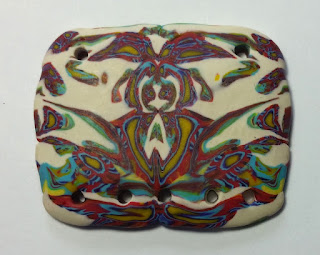 At one point, Carol was exploring her version of prehistoric beads to be sold in a museum and made these 3 pieces.  The small pair of beads were double-sided wolf heads so that there is a face front and back. 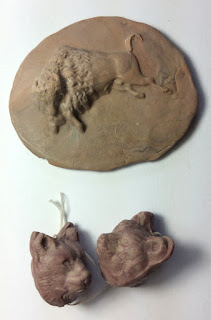 One of my other fond memories of Carol is when she took a flying trip from Pittsburgh to New York City to visit The Gates, Christo's project of 7,503 fabric panels measuring 16 feet tall that were installed along the walkways of Central Park.  We met Carol in Central Park to walk through part of the installation and then spent a fun day with her in Manhattan until it was time for her to return home.  Here she is on that cold winter's day in 2005, standing in front of some of the orange panels. 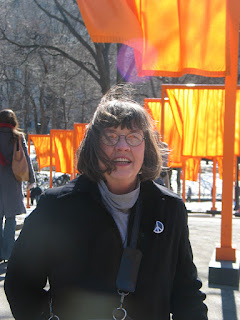 It's a nice way to remember a woman who has been a positive presence in our life for decades and will be missed by many.  I'd say "rest in peace," but, knowing Carol, she is already up to something interesting in the spiritual realm.  See you on the other side, my friend.

Posted by Reckless Beading at 9:13 PM No comments: