Our annual Christmas Eve tour of holiday windows was an on-again, off-again expedition as we faced a weather report of 40-50 mph winds and much rain, but we set off to see if we could beat the bad weather.  As might be expected in this pandemic year, a lot of stores did not decorate for Christmas (partly because they seem to have decided that this was a good time to renovate).  Also, no surprise that there were few people on the streets until you went to take a photo of something.

We started at the Plaza Hotel (with Barney's having closed), which has erected scaffolding for work on its facade but put up wreaths in the windows.  The fountain in front of the Plaza, however, was decorated with a fun scene of oversized ornaments.

Next was Bergdorf's, which did something different this year.  While they did have a few fashion windows, most of the decoration was sparkly, oversized letters spelling out different positive words.

My friend Judith would have loved the eye

The Fifth Avenue Association hired a company to install 10 oversized, lighted "toys" along 5th Avenue to brighten the season; each toy had a code that you could scan to read a story about the display.  The first one we saw was the toy box.

The next was a taxi.  We had waited to take a photo of this one until the Chinese family was done photographing their daughter but she had no intention of leaving the taxi that was just her size; so I took her photo as well.

Tiffany's is doing so much renovation that the store is actually closed and the windows are boarded up; so no Christmas windows on the Avenue.  We walked down the side street to the temporary entrance and found 2 half-hearted efforts. 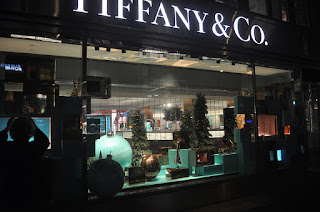 We noticed that Dior was decorated, so we wandered across the street to check it out. 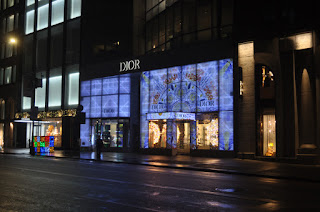 As in past Christmases, Trump Tower was just a big, barricaded, black hole among the festive lights.

Don liked the giant stuffed moose at Abercrombie and Fitch. 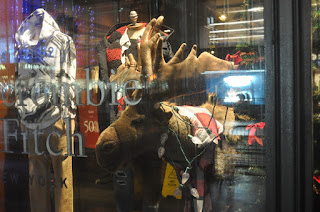 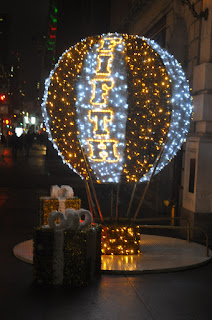 Coach did strings of lights on their second story.

The bear toy was very popular with people who thought it was fun to sit on its legs to have their photo taken.  It was so popular that I didn't have time to frame a good shot of it before the next tourists were trying to break its framework legs. 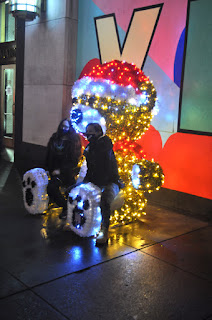 Cartier had new panthers this year. 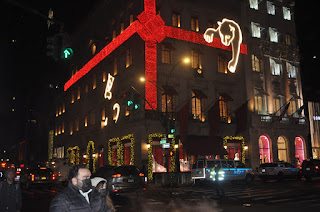 Then we were at Rockefeller Center, where access to the tree was severely limited.  Everyone was crowded by the one viewpoint so it was hard to get a good photo but Don did pretty well.  It started raining while we were looking at the tree but we were prepared with umbrellas and hoods.  We had decided to call it a night after we looked at Saks' windows but it stopped raining while we were there, so we kept going.

Saks was next and their theme was This is How We Celebrate and each window was a representation of how people mark occasions. 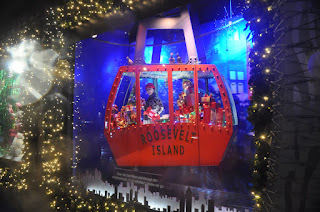 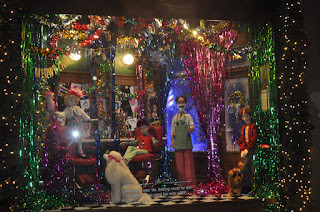 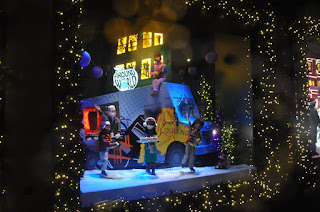 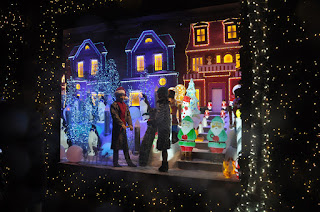 This fashion window was just interesting. 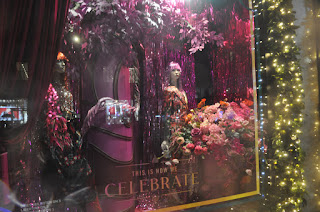 Next on our walk was a stuffed beagle or hound in the window of a souvenir store that caught my eye.

The wind picked up to the point that it was a bit difficult to walk but we were so close to finishing that we pushed on.  Next were the lions in front of the New York Public Library.  Fortitude was wearing a mask, although it had slipped down off his nose.  Fortitude had lost his mask because people keep stealing them off the 2 lions for souvenirs.

Macy's honored essential workers with a theme of  Give, Love, Believe. 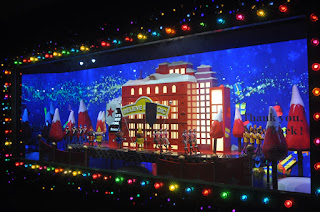 That was it for this year: a smaller display but New York is still celebrating the holidays.  May next year be better for all of us.  Happy New Year.