I am busy making kits for my two bead crochet classes at the Innovative Beads Expo to be held in Marlborough, Massachusetts May 6-8, 2011. 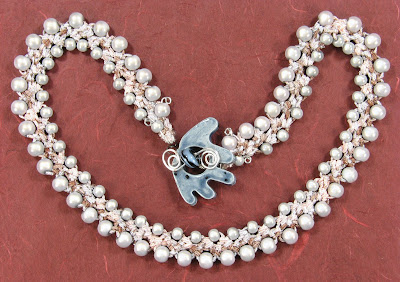 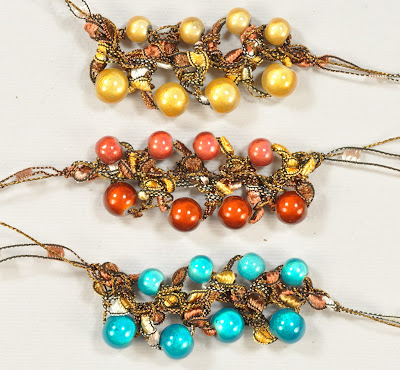 I have also come up with a few other choices. It has been a challenge to come up with interesting yarns that will fit through the small holes of the beads but I have learned a few tricks for stringing. 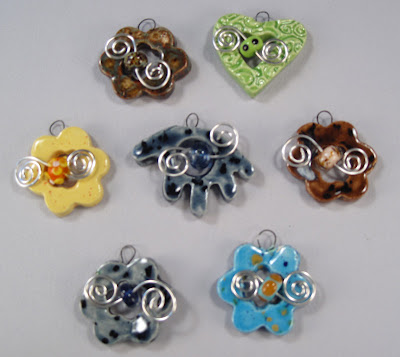 I also got a shipment of ceramic clasps made by Saralee Rhoads of Mad About Beads. I discovered Saralee's clasps at Bead and Button last year and they were the perfect finish to my bead crochet necklace. Check out her work at: http://www.madaboutbeads.com/ 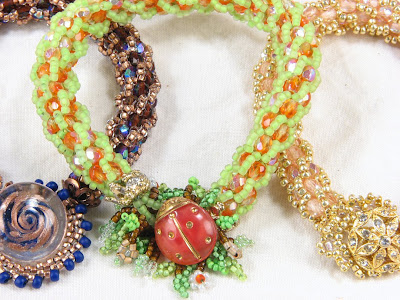 For more information and class registration, visit http://www.innovativebeadsexpo.com/
Posted by Reckless Beading at 12:28 PM No comments:

Looking at our grey, rainy weather , it is hard to believe that we were in Boca Raton only 10 days ago. My two brothers, their wives, my husband, and I surprised my parents with a belated celebration for my mom's birthday. We flew from snowy, rainy New York to sunny weather with temperatures in the low 80s. 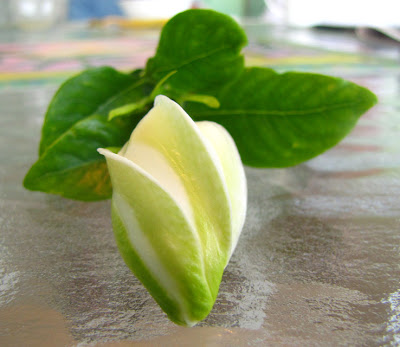 Not much was blooming in Boca, but my father's gardenias were putting on a show. Here is a bud just ready to open that we brought inside. 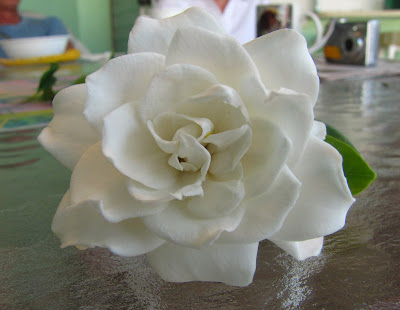 We brought a number of blossoms into the house to enjoy their beauty and perfume. 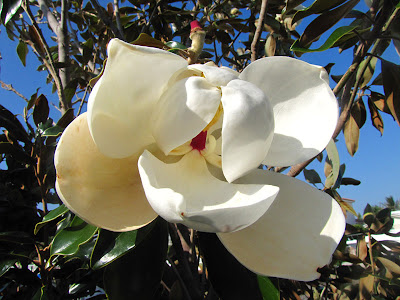 The magnolia tree was also in bloom. Casey, one my sisters-in-law, wanted photos of the flowers as inspiration for the sugar flowers she wanted to make for her cake business in Texas http://www.bridestable.com/. 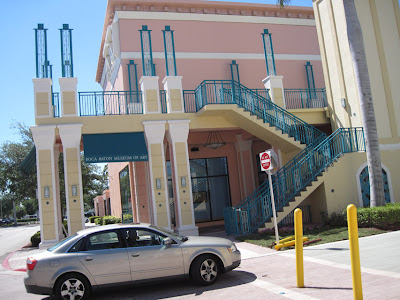 Although we spent most of time with family activities, my parents took us to the Boca Raton Museum of Art. 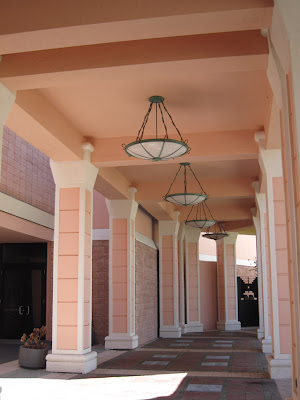 Here is a photo of part of the courtyard at the museum's entrance. 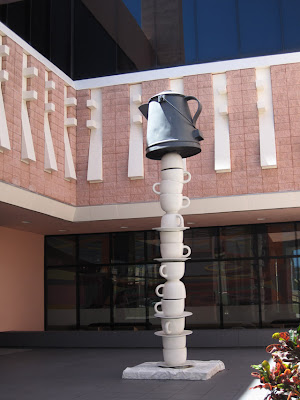 This is a sculpture by Julio Larraz entitled Space Station which "suggests the irony of Latin American political realities," according to the accompanying plaque. 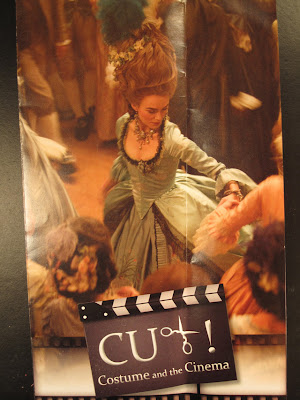 We went to the museum to see Cut! Costume and the Cinema, an exhibit of some of the period costumes made by Cosprop for film, television, and theater. My mom gets gold stars for noticing the museum's add in the paper because it was an interesting collection.

We weren't allowed to take any photos inside the museum but here are a few shots from the brochure.

This is one of the costumes worn by Kiera Knightley in The Duchess.

A frock coat with metallic embroidery worn by Heath Ledger in Casanova. 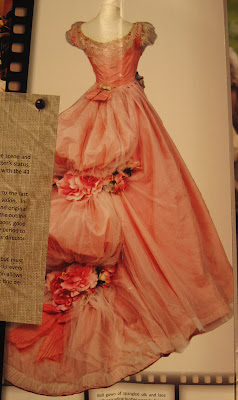 Ball gown of silk and lace worn by Emmy Rossum as Christine in The Phantom of the Opera. 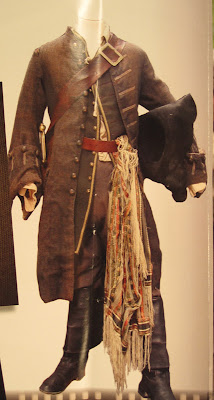 Jophnny Depp's eccentric costume for his role as Captain Jack Sparrow in Pirates of the Carribean: The Curse of the Black Pearl. 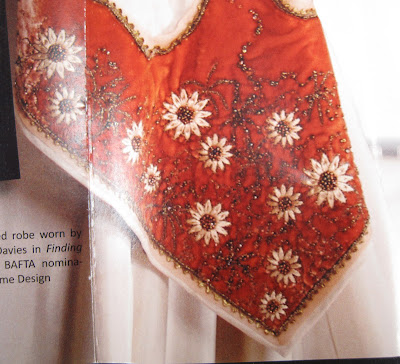 Detail of a dress worn by Kate Winslet in Finding Neverland.

This is a traveling exhibit so it will show up at a number of venues. Don't miss it if it comes to your city.


Although we were celebrating my mom's birthday, both of my brothers had presents for us as well. 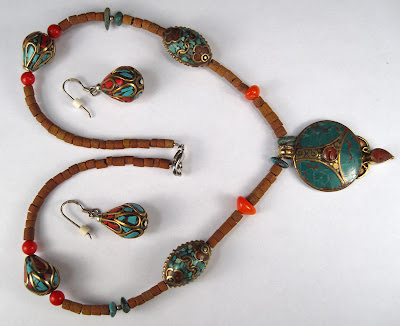 Tom, our international traveler, brought me a necklace and matching earrings that he bought in Bangkok, Thailand. It was made by Iftikhar Asif, a jeweler from Afghanistan with a business in Bangkok.

My brother Bill, who is a talented woodworker, made us all wine bottle holders. Here is a shot of the holder laying flat. Doesn't look like much, does it? A piece of wood with a hole in one end and a bevelled edge at the other. 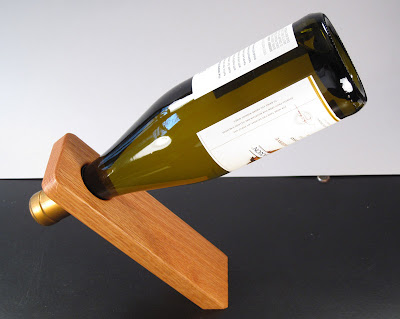 Well, here it is holding a bottle of wine. It's all in the weight and balance. How neat is that? 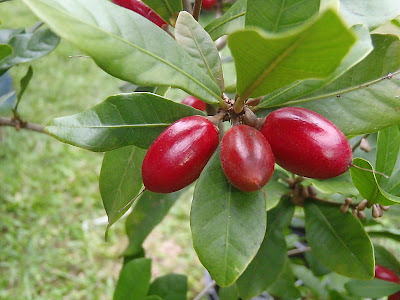 Bill had one more surprise for us. Before we sat down to a delicious barbeque dinner prepared by Bill and his wife Joan, my brother gave me a few berries from one of the miracle fruit plants in his yard. The Synsepalum dulcificum plant, otherwise known as the miracle plant, produces berries that, when eaten, make sour foods taste sweet. It was too dark to take a photo of my borther's plant so this is a photo from Wikipedia taken by Hamale Lyman.

We tried the berries at breakfast the next morning and were surprised to find that grapefruit sections and lime wedges did indeed taste sweet. It was strange because my tongue said "sweet" but my brain said "What? It's supposed to be sour."


We had a relaxing time in Florida (which I doubly appreciated because I was recovering from the flu) and loved seeing most of my family. Then it was time to put on our coats, hats, and gloves to return to cold and rainy New York City.
Posted by Reckless Beading at 12:49 PM No comments: