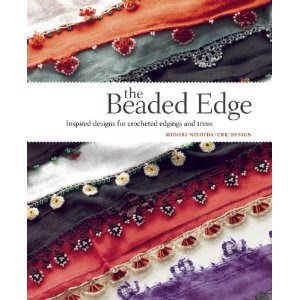 Given my interest in bead crochet and Turkish oyalari, I was anxious to read The Beaded Edge: Ispired designs for crocheted edgings and trims by Midori Nishida/CRK Designs recently published by Interweave Press. This is an English version of the Japanese book Edgings with Beads by Crochet and Needle Vol. 1. I finally had a chance this weekend to read the copy that I bought.

Despite the general title, the book is being marketed as an effort to introduce Turkish bead crochet trim to a wider audience. Ms. Nishida explains that she discovered this form of Turkish trim at an exhibition of oya held in Japan and has been studying boncuk oyalari (or bead trim) ever since. A language note: the Turkish term for the trim is the plural oyalari but crafters in the U.S. and Europe tend to call it oya, the singular form.

Instructions are given for the edgings only along with suggestions for how to use the trim. The sample projects are modern applications of Turkish trim and range in size from decoration on felt Christmas ornaments to edging for a shawl. There is information on materials needed and hints for adding trim to textiles. If you are familiar with Japanese diagrams, the crochet instructions are clear.

Despite all of the information, this is not a book for beginners or those who want to learn to crochet but is geared towards bead crocheters who are used to working with small beads and fine thread. Bead used range from size 7/0 -12/0 and threads range from lace-weight crochet thread to wool embroidery thread. That said, the book will appeal to crafters who want to play with making some fun beaded edgings.

If you are also interested in learning more about oya, however, this book will prove frustrating. Since Ms. Nishida states that her mission is to "share the charm of Turkish Boncuk oya and the pleasure of making it with as many people as I could," I was frustrated by the blurred line between actual Turkish techniques and creative interpretation. 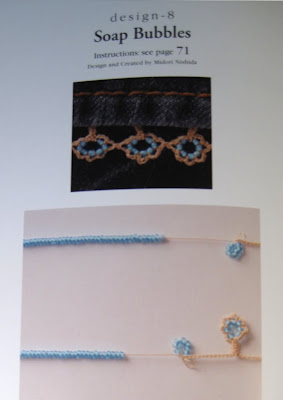 Some of the edgings are authentic examples of Turkish oyalari but with new names, like this pattern for design #8. The Turkish name for this exact pattern is pigeon's eye or bird's eye. Some of the other edgings may actually be her own invention or a combination of Turkish and Japanese beadwork techniques--the clever beadwoven star comes to mind--but those are still lumped in with authentic Turkish patterns.

I sympathize with Ms. Nishida because the question of making traditional techniques our own is one we artists struggle with all the time. There is also the time-honored practice of looking at an object and making our own version of it with possibly different techniques. In a book that purports to teach Turkish techniques though, the line between academic information and creative interpretation could have been better delineated.

Not that information on Turkish oyalari is totally lacking. There is a one-page explanantion entitled "Beautiful Turkish Edgings" opposite a full-page version of the cover photo, which turns out to be examples of pieces from the collection of Mr. and Mrs. Ishimoto. The book also includes a two-page essay entitled "Village hopping in search of Turkish hand-made crafts" about the Ishimoto's collecting efforts and Ms. Nishida's trip to Turkey in 2006. Unfortunately, the photos included in that section are disappointedly small.

One word about the patterns, if you have seen the sample pattern on the CrochetMe blog, http://www.crochetme.com/blogs/crochet_me/archive/2011/2/28/be-inspired-with-a-free-beaded-edging.aspx
be aware that all of the instructions are not on the same page like they are shown in the blog. The page with the first photo of the edging has 3 photos of the particular trim in progress but the actual instructions and diagram are in the back so you may need to flip back and forth as you work. 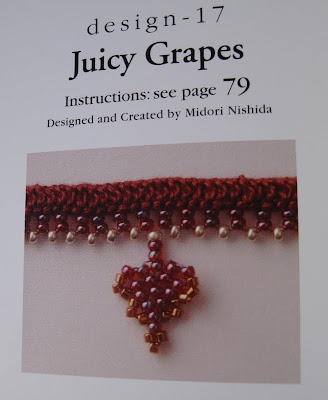 Also, the bead weaving stitch used in the grapes (shown at right) and peppers patterns is just called "bead stitch" or off-loom beading" but it looks like peyote stitch. If you have never tried that stitch and need to find instructions for it, there are peyote tutorials available elsewhere.

Despite my disappointment that the book doesn't have more information on actual oya edgings, I applaud Ms. Nishida's efforts to popularize this Turkish craft and am heartened to see the positive response to the book in Japan and the U.S. Renewed interest in oyalari will hopefully keep the craft alive in the countries where it still made. 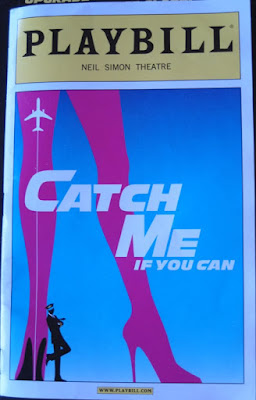 After months of knitting white,blue, and champagne sweaters for a new Broadway musical entitled "Catch Me if You Can," I finally have a few minutes to tell you what I have been doing.
For those whose missed the movie, it is the story of Frank Abagnale, Jr. a teenager who posed as 8 different people including a Pam Am Pilot, Atlanta pediatrician, and assistant attorney general in order to pass bad checks in 26 countries over a period of 5 years in the 1960s. Before he was caught at age 21, Frank had stolen 2.5 million U.S. dollars. After serving time in prison, Frank became a security consultant for the FBI and founded his own financial security business.

Like the movie, the Broadway musical focuses on Frank Abagnale, Jr., played by Aaron Tveit, and the FBI agent Carl Hanratty who chased him for years, played by Norbert Leo Butz. Tom Wopat plays Frank Abagnale, Sr., a najor influence in Jr.'s life The show opens with the capture of Frank by Carl and unfolds as a 1960s variety show as Frank tells his story to the audience. As you can see from the playbill, the mood of the show is that of the glamorous, high-flying 60s. 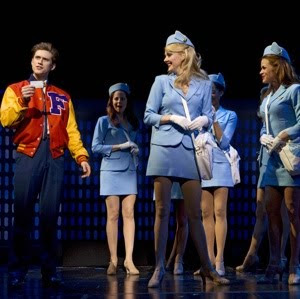 Here is a shot of Frank meeting some Pan Am stewardesses, courtesy of the shows website http://catchmethemusical.com/ 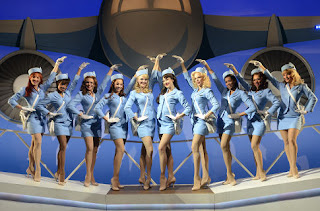 Another shot of the stews courtesy of the Daily News. Flying never looked so exciting. The link to the full story is below:
http://www.nydailynews.com/entertainment/music/2011/03/20/2011-03-20_jet_propelled_theyve_got_legs_and_the_catch_me_if_you_can_showgirls_know_how_to_.html?r=entertainment
My part in the show was 10 men's, machine-knit, cardigan sweaters for the male dancers to wear during a number called "(Our) Family Tree," sung when Frank meets his fiance's family. William Ivey Long, the costume designer, was inspired by sweaters worn on the Perry Como for this number. 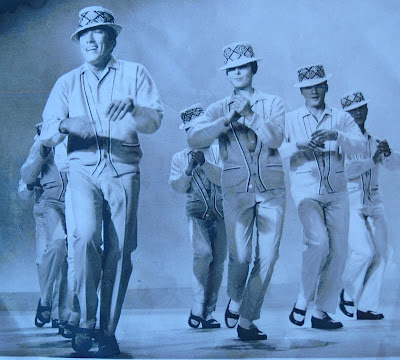 Here is the original research showing Andy Williams and his dancers. 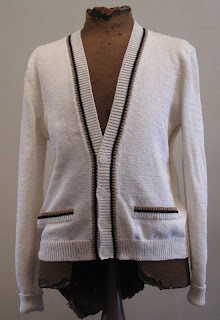 Here is one of the finished sweaters. The body is knit with a white wool/rayon yarn and trimmed with stripes of navy blue and dark champagne. I did all of the knitting myself but was lucky enough to entice 4 friends to help me put the sweaters together in time for the first tech rehearsal.
The sweaters are worn with cream pants, a cream polo shirt, and a spiffy hat. The sweater looks a little dumpy because my dress form doesn't have the chest and shoulders of the chorus boys. On the right bodies, the sweaters look GAWGEOUS and the Catch Me dancers have the right bodies. Heck, you could put burlap sacks on these guys and the sacks would look good.
We were lucky enought to see the show and enjoyed it. The set is amazing, the costumes are fun and glamorous, the music is bouncy, and the dancing is great. Norbert Leo Butz breaks out of his staid, FBI character to do a dance number that amazed everyone with it's complexity and energy. The story also delves into why Frank became a con man and how the lark turned into a chase that turned into a treadmill he couldn't get off; it's not all glitz and gloss. The show even manages not to end on a down note with Frank's capture; the cast briefly relates that Frank served his time in jail and turned his life around. Quite a tale made into an entertaining musical.
After that it was more chain mail for the Metropolitan Opera's production of Die Walkure. 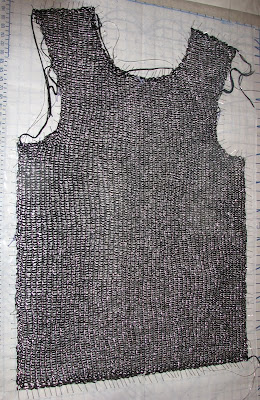 Here is one of the pieces drying after being steamed into shape.
Now, I am cleaning up and deciding which beadwork project I need to work on next.
Posted by Reckless Beading at 12:07 PM 1 comment: