I thought you might like to see a peak at the issues that we teachers sometimes face as we try to bring you the best classes possible.  As I have mentioned, I will be teaching the Luminous Tweed bracelet class at Bead Fest Spring 2015 on April 11 from 5:30-8:30 pm and at Beaders Best 2015 in Hamburg, Germany.  When I used the etched farfalle beads in this bracelet I had no idea what a merry chase it would be to find more of these seductive beads.

Last year, I grabbed two small hanks of the red etched farfalle beads from York Beads at Bead and Button  2014 and came up with the bracelet design.   This was the first bracelet: 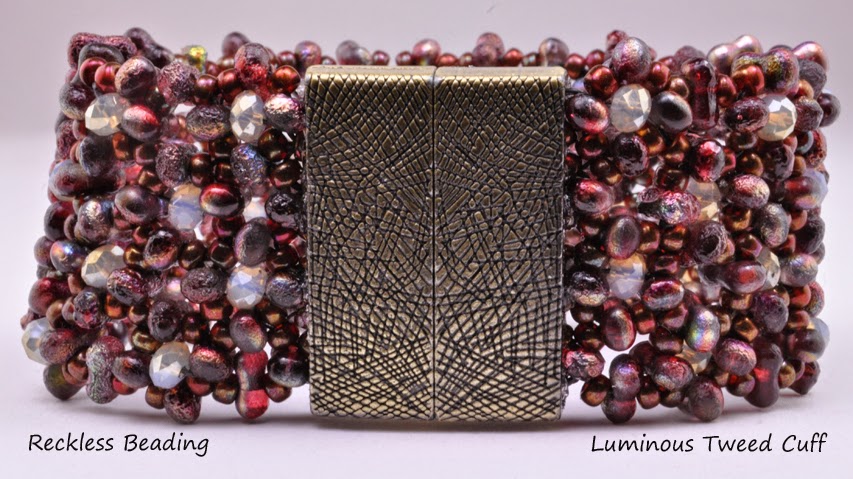 Perry from York Beads (the inventor and sole distributor of the beads) promised us the next shipment of beads was due in October.  Due to circumstances beyond his control, October turned into November, November turned into December, and December turned into January.  Yes, last month.
By the beginning of January, I was getting pretty worried because I had no beads, had no way to get them from anyone else, and didn't want to disappoint the students who had already signed up for the class by cancelling it. 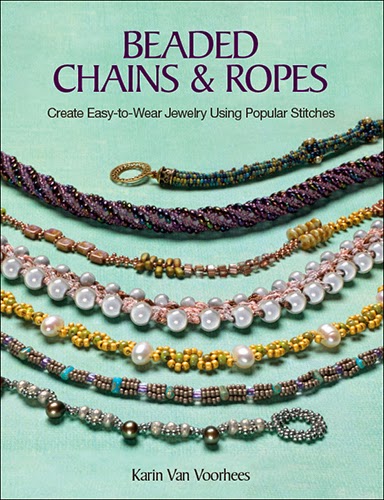 I have been busy with class samples (more about that later) but I wanted to take a break and tell you that Kalmbach Publishing Co. has announced the release date of Beaded Chains and Ropes.  This  new book has patterns for 27 beadwork ropes and chains that can be worn by themselves or as support for a pendant or special bead.  I am privileged to have 2 patterns in the book, one of which can be seen in the middle of the cover- yes, the pink and white rope.
Along with two of my patterns, there are also designs by Jill Wiseman, Julia Gerlach, Anna Elizabeth Draeger, and many more talented artists.  The projects employ a variety of stitches including bead crochet, herringbone, RAW, spiral rope, St. Petersburg chain, and kumihimo.
For more information (including a peak inside  the book) or to pre-order a copy, you can go to the Jewelry and Beading Store.  I know I have my eye on a few patterns from the book.

Posted by Reckless Beading at 5:17 PM No comments: