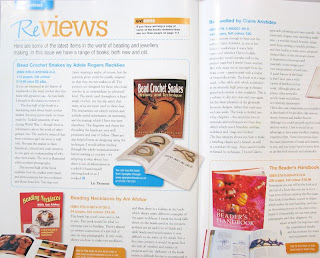 I am busy knitting chain mail but had to tell everyone that Bead, one of the major beadwork magazines in Great Britain, gave Bead Crochet Snakes a very nice review in the April/May 2009 issue. If you haven't seen the magazine before, you may find it in a major bookstore. Their website is http://www.bead.tv/. This issue has some fun brick stitch flower patterns that I can't wait to try, but for now it's back to the knitting
machine. 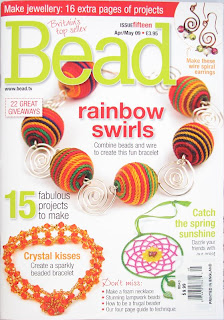 Posted by Reckless Beading at 10:26 AM No comments: 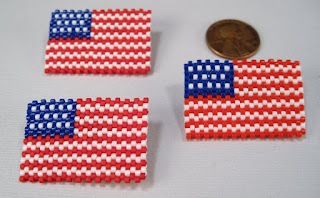 This afternoon we followed tradition and attended the memorial Day concert at Green-Wood Cemetery here in the Republic of Brooklyn. For those who don't live in New York, Green-Wood is a 478 acre "rural" burial ground that was founded in 1878 and contains such "permanent visitors" as Leonard Bernstein, Currier and Ives, F.A.O. Schwartz, Jean-Michel Besquiat, Louis Comfort Tiffany, Civil War generals, baseball legends, politicians, artists, entertainers, inventors, and just plain folks. Green-Wood does not allow photos but you can visit http://www.greenwoodcemetery.org/ to see photos of the grounds and monuments. They are truly spectacular.

This is the second year that the concert was performed by the ISO Symphonic Band, made up of some of New York's talented, budding musicians. We heard a number of songs that were unfamiliar to me but there were plenty of old favorites like selections from "West Side Story", "America the Beautiful", "Over the Rainbow", and a selection of Glenn Miller tunes. The most moving part of the concert was when the band plays the Armed Services Salute and veterans of each of the services stand up while a snippet of their anthem is being played so that we can thank them for their service by applauding. Sad to say, the number of World WAr II veterans gets smaller every year.

In honor of Memorial Day, I am posting photos of some little flag pins that I made in 2001. The pattern for the cute American flags was made by Dana Hall (http://www.dbeads.net/), who graciously allowed me to make flags to sell at the 2001 Broadway Cares Flea Market after the Towers fell. The money from the flea market went to a charity for victims of the World Trade Center attack. I pulled out one of the unfinished flags last night and glued the back to it so that I could wear a flag pin to the concert.

The Union Jack flag is a design I came up with for my fellow Bead Society of Great Britain members after the bombings in their London subway system. I don't think they celebrate Memorial Day in the U.K., but my research into World War I leaves me with a soft spot for British soldiers. 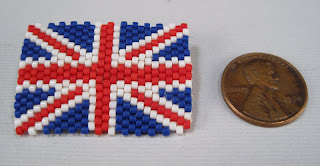 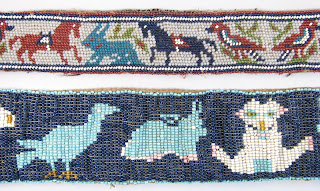 Having recovered from demonstrating brick stitch at the NY Bead Society's annual "Tips and Tricks Meeting", I am now working on my presentation for the Bead Society of Great Britain and honing my Power Point skills. I decided to post this photo because it tickles me so much. The photo compares a blue and white, loomwork belt made by a Turkish soldier in World War I with a multi-colored belt made by a civilian woman (possibly before World War I). I just love the bunnies and the fact that all of the animals are the same size.
Posted by Reckless Beading at 11:31 AM No comments: 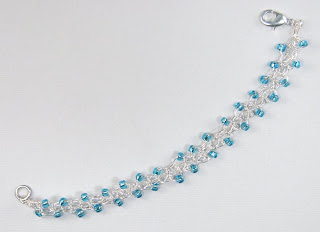 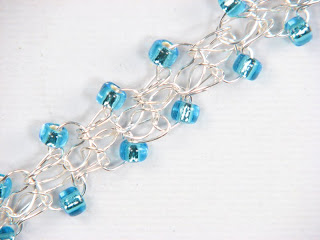 I am so excited--I finished my first wire bead crochet bracelet and I only had to make it 3 times to get a finished product. I ran into trouble when trying to sew the lobster claw and ring to the bracelet because I was treating the wire like thread and it kept breaking. Pat Moses-Caudel of Wild Poppy Designs was kind enough to give me some hints on our Yahoo bead crochet group. If you haven't seen some of Pat's work, you can visit http://imageevent.com/patmcaudel. The problem was that I was trying to sew through the jump ring; once I followed Pat's suggestion to make a wire loop and then attach the jump ring, my problem was solved.
Posted by Reckless Beading at 8:24 PM No comments: 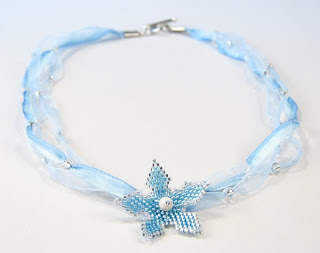 After a number of detours, I finally finished the necklace with the blue brick stitch flowers pattern designed by Kerrie Slade. To see some of Kerrie's beadwork, visit http://www.kerrieslade.co.uk/
The project was a bit of a challenge because it is for a young lady whose taste in jewelry is much simpler than mine. Sparked by a photo in "Bead & Button, Ribbon & Felt Jewelry" by Deobroah Schneebeli-Morrell, I bought some lovely ombre silk ribbon, a coordinating organza ribbon, a bunch of size 6/0 seed beads and started playing.
I had planned to add two smaller brick stitch flowers, but ran into weight problems with such ethereal ribbons. In the end, simpler was better.
I am already thinking about what I can do for me with the remaining brick stitch flowers. 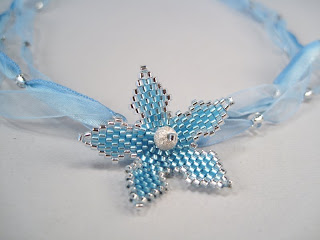 Posted by Reckless Beading at 11:28 AM No comments: 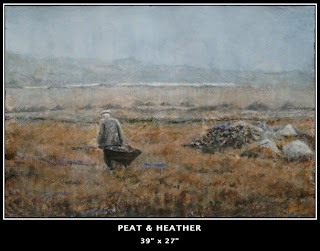 Tonight I went to the opening of my friend Nadine's show of watercolors of her trip through Europe at the Berlitz Gallery in Rockefeller Center. I was going to take a few photos but there was not even enough room to swing a cat, let alone get back far enough for a decent photo. It was exciting to see so many people--the gallery people looked a little shell-shocked at the crowd.

If you are in the area, the watercolor show will be at the Berlitz Gallery (40 West 51 st, ground level) until May 31, 2009. For more information about Nadine, visit http://www.nadinepaints.com/. If you can't make it to the show, here is another painting to enjoy. 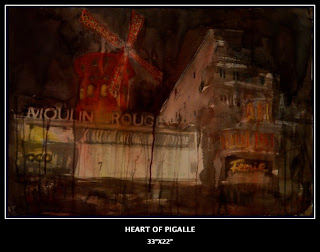 Posted by Reckless Beading at 7:29 PM No comments:

I made some of the blue, brick stitch flowers designed by Kerrie Slade from the February/March issue of Beadwork as part of a necklace for a relative (no more details--it is a surprise). Here is what I have so far. The penny is for size. 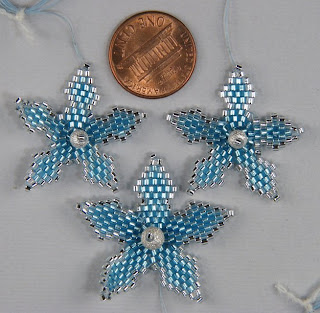 Kerrie just put her flowers on a silver chain, but I wanted to do something else. Playing around last night, I tried bead crochet with wire, using the Turkish Flat Bead Crochet stitch that I learned while travelling in Turkey. It won't work with the blue flowers, but I came up with an exciting option for a bracelet design; it's rather delicate now but could be made with larger beads and wire. Can't wait to play further with this experiment but first I have to finish the blue flower necklace. Here is the wire bead crochet experiment. 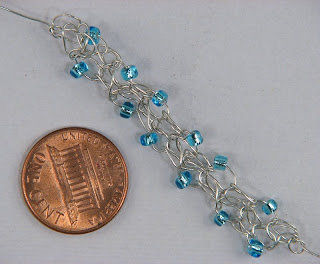 Posted by Reckless Beading at 11:29 AM No comments: 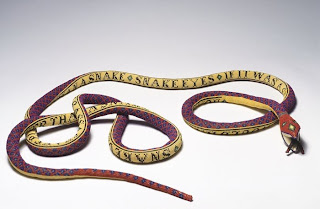 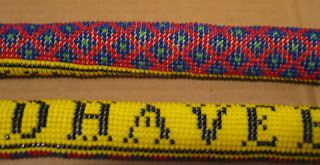 Now that everything is turned in, I have a moment to post a photo of my second submission to the juried beadwork exhibit for the Bead Society's World of Beads VIII. I have submitted my 15' 6" snake sporting negative sayings about snakes on his belly. The piece is titled "Why is Everybody Always Picking on Me?" The whole thing is bead crochet and it took me over 400 hours spread over a year. Enjoy the large photo by D. James Dee and the detail shot by me.
Posted by Reckless Beading at 11:43 AM No comments: