MY 2013 CLASSES AT INNOVATIVE BEADS EXPO

I have been getting questions about where I will be teaching so I am happy to say that the 2013 class schedule for the Innovative Beads Expo shows is now on their website. First, the projects I will be teaching:

Learn to crochet with wire by making this fun flower and the charming birds nest earrings. Students will learn which sizes of wire are best for crochet, tricks for working with wire, the chain stitch, single crochet, how to add beads to your work, and how to crochet flat shapes and in the
round. Crochet experience helpful but not necessary.

Hope to see you at one of the shows.

Posted by Reckless Beading at 4:47 PM No comments: 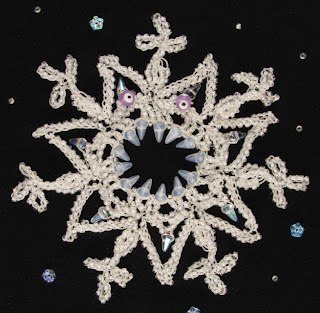 This is what happens when you watch the latest Dr. Who Christmas special about predatory snow at midnight on a cold, winter's night with spike beads sitting on the table beside you.
For those of you who haven't seen them yet, the Czech glass spike beads are one of  the new offerings from York Beads and come in 4 sizes from 12x18 mm ones down to 5x8 mm mini-spikes.  I used the 5x8mm beads in opal and crystal AB, size 12 Japanese seed beads, two eye beads, and a white/crystal decorative thread to bead crochet this little monster.  Good thing we don't see snow like this in my neighborhood.

Posted by Reckless Beading at 8:42 PM No comments:

Friday, our last day in Rome, was reserved for visiting the Vatican Museum.  I bought tickets online before we left and I was so glad that I did.


After the museum, I wanted to visit St. Peter's Basilica until we saw the line to get through security.

Instead we wandered down to the Tiber River to see Castle Sant'Angelo from afar.


After that we took a bus across the river to Trastevere, a small neighborhood of cobblestoned streets lined with Medieval houses.   We got off the bus just in time for the rainstorm to start.

Posted by Reckless Beading at 7:49 PM No comments:

Now for the post that many of you have been waiting for: bead shopping.  I wanted some Murano glass pendants so I looked online for bead shops before we left but found a lot of vague directions.  You know, "start out at this piazza and then wander down this street and I  think it is on the left-hand side a few blocks down but, if not, there are other fun shops."  I did find the address for two bead shops shops near the Pantheon.
The first was a shop called Novita near the Piazza Navona, a tiny space housing floor-to-ceiling shelves of boxes full of metal findings and filigree.  You had to ask the clerk to take down each box you wanted to look at and it didn't seem like the clerk spoke much English so we moved on.   Beads and Beyond did a review of this shop if you would like more information.
We wandered down the block and ran across La Perla D'Oriente, an Aladdin's cave of beads and glass items owned by Rankoussi Mazan and his wife Antonella.  Rankoussi is originally from Damascus, Syria but has lived in Rome for over 20 years.  He is a bead artist who has studied glass bead making in may countries and now has his own small factory in Rome.  He also sells beads from other small factories discovered through his travels.  I was fortunate to get a demonstration of his bead-making prowess.


If you want to do your own shopping, Rankoussi assures me that he does mail order so here is the website La Perla D'Oriente/Bead Shop Rome.  I never found any official Murano pendants but was very happy with the beads that I bought.

We needed a "pick me up" after bead shopping, so we headed to Tazza d"Oro Casa del Caffe, one of Rome's top coffee shop, for a granita di caffe con panna.  In English, that is a coffee slush (think shaved ice) layered with whipped cream.  We have no photos of the creation because we were too busy scarfing it down but--trust me-- it is not to be missed.  Jazzed up on coffee and sugar, we continued out stroll.

We braved the crowds to visit the inside of The Pantheon.


It was time for dinner after The Pantheon, so we tried Ciccia Bomba, another traditional trattoria near the Piazza Navona where we could dine outside, although it was a bit crowded.

We then popped into the largest and most lavish McDonald's facing the Spanish Steps but  got chased out when Don tried to take photos.

ROME TRIP 2012: OSTIA ANTICA, SAILING INTO THE PAST

I am breaking Thursday into two parts so that it won't be a loooong post. Since we didn't have time to travel to Pompeii or Herculaneum, we decided to visit Ostia Antica instead. Ostia Antica is now an archeological site but it was an ancient Roman port of 30-40,000 people at its height. It is easy to get to with a 45-minute trip by metro and train and a short walk through the town.
﻿


There was a nice cafeteria and museum shop behind the museum in a modern building so we stopped to have lunch and look at the shop.﻿﻿


Posted by Reckless Beading at 6:18 PM No comments: